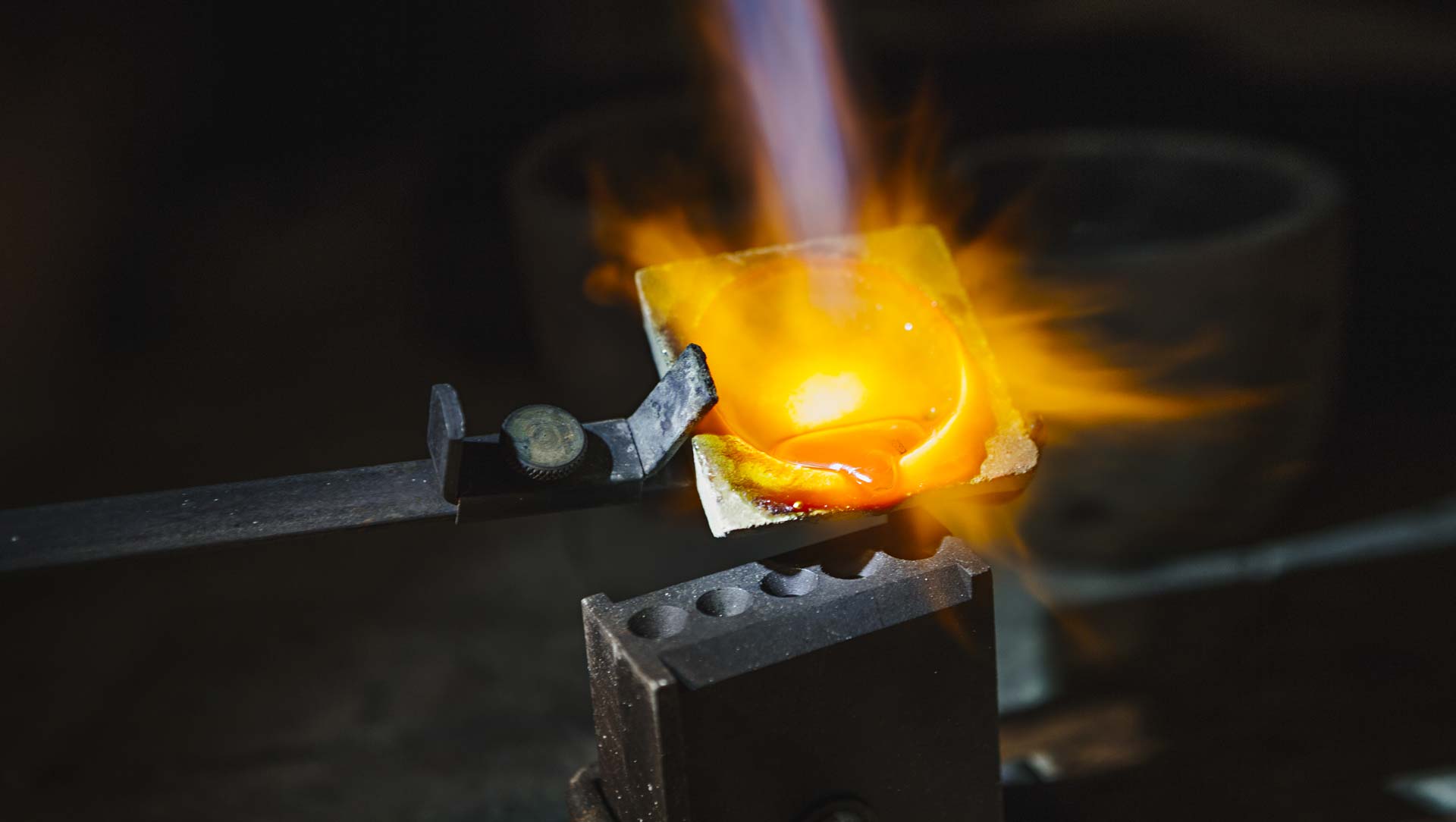 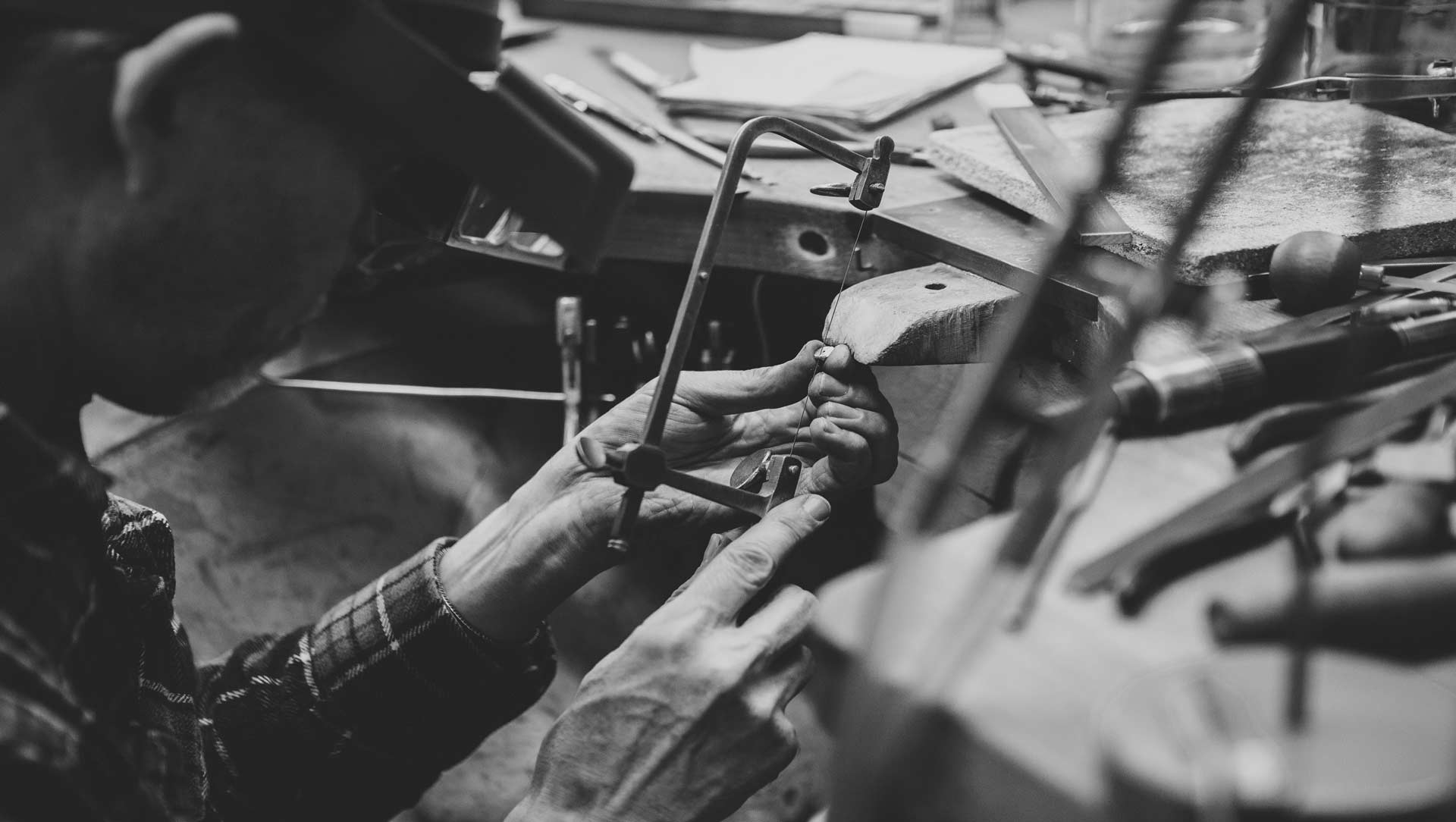 1968 was a very important year for society in Germany and throughout Europe. The first postwar generation vociferously attracted attention to its new values. Jörg Heinz, who was born in 1942, studied with Professor Reinhold Reiling at the School of Arts and Crafts in Pforzheim, where he experienced new values in modern jewellery of the contemporary era. After a four-year sojourn in Denmark, where he became acquainted with Scandinavia’s modern designer jewellery and where he met his future wife Irene, he returned to his native town in 1968. This same year, he founded his business on the premises of his parents’ home at Ring Strasse 4. He began by developing pearl jewellery, primarily one-of-a-kind pieces and small series. It took plenty of effort to convince jewelers to sell these items: competition was very strong in Pforzheim’s booming jewellery industry, but innovative design was scarcely in demand in the late 1960s.

In his jewellery designs, as well as in discussions with customers, the young designer and goldsmith discovered the “Achilles’ heel” of every choker: the clasp. Throughout the history of jewellery culture, jewellery designers had viewed the closure – often a simple hook – as an unloved and often neglected necessity. Reaching behind to open a choker’s clasp at the nape of the neck was both awkward and problematic for its wearer. After intensive contemplation and experimentation, Jörg Heinz discovered a surprising solution in 1974. He put the clasp into the center of the passion for jewellery and transformed it into the attractive centerpiece of the choker. The epoch during which closures had led a twilight existence had come to a close – and a new era had begun!

The ingeniousness of Jörg Heinz’s clasp begins with its function, which is absolutely secure yet child’s play to operate. Every woman who wears jewellery can open and close her choker or necklace simply by raising her hands in front of her and then pressing and twisting the clasp. The clasp’s precise mechanism makes it easy to open and keeps it securely closed. Ever since, the clasp has been considered a piece of jewellery in its own right – and it has proudly basked in the limelight at center stage, where it irresistibly attracts admiring attention.

But the invention of the modern jewellery clasp in 1974 was more than just a technical and design innovation. As interchangeable and attractive pieces of jewellery, clasps by Jörg Heinz embody one of the first variable jewellery systems in the world of modern jewellery design. Furthermore, and in an interesting way, each clasp ably satisfies the demand of the modern era: namely, that form should follow function.

Perfect for every type of woman, every fashion and every occasion

Whether they feature pearls, gold, platinum, gemstones, coral or stainless steel, Jörg Heinz’s interchangeable clasps have assured that chains are child’s play to open, close and transform. Jörg Heinz thus gave new stylistic freedom to women who love to wear jewellery. Each wearer can adapt her choker or necklace to match every fashion and to suit every occasion: sleekly simple or self-confident for everyday wear, tastefully elegant for the business look, or opulently lavish for festive eveningwear.

In the years following 1974, the firm’s founder evinced seemingly inexhaustible creativity and designed an entire cosmos of clasps: for every type of woman and for every occasion for which jewellery is appropriate. In the decades since the 1970s, Jörg Heinz’s variable jewellery clasps have enabled their wearers to participate in the delightful project of designing their own individual appearance. This freedom and creativity harmonize perfectly with the mindset of self-confident modern women.

During the past four decades, the Jörg Heinz Manufactory has steadily refined its technological and craftsmanly capabilities. When the firm moved to its new premises in Neulingen near Pforzheim in January 2007, ample space became available in which the business could finally make optimal logistical use of the know-how that had continually grown and deepened over the years. But also at the old premises in Pforzheim, Jörg Heinz’s jewellery clasps had been manufactured almost entirely autonomously in a perfect interplay of modern technologies and traditional handcraftsmanship. CNC-guided milling machines, automated lathes, and lasers have long been used to achieve the utmost precision. The firm’s founder was personally and formatively involved in many developments. The sphere performs a central function as eyecatcher and serves as a vault for the clasp’s discriminatingly fine mechanism, so in 1990 Jörg Heinz had already developed a technique which made it possible to weld with lasers and to engrave three-dimensionally in eight axes. But the beauty of the outer forms and surfaces cannot be consummated without the skilled hands of experienced goldsmiths. As the 21st century gets underway, quality design and traditional handcraftsmanship remain the foundations of the creative work at the manufactory’s new premises.

The business’s relocation in January 2007 meant that the thirty-five highly skilled employees at the Jörg Heinz Manufactory could occupy modern workplaces designed in accord with the latest scientific findings. The twofold basis for the firm’s continued success is faith in the staff’s competence and belief in the viability of Germany as a production site. Last but not least, Jörg Heinz’s confidence is also founded on the next generation in his own family. The firm’s founder is ably assisted by his sons Martin and Lars Heinz and by his daughter Andrea Mössner: co-owner and managing director Martin Heinz is responsible for marketing; Lars Heinz, who won awards from the State and Federal Chamber of Industry and Commerce in 2007, can look back on an outstandingly successful apprenticeship as a jeweler and goldsmith; and Andrea Mössner is responsible for purchasing and for the choice of gemstones. Together with a highly qualified team of colleagues who have been with the firm for many years, this family business feels confident to face the challenges of a globalized world. Leading jewelers in Germany and throughout the world have relied on jewellery clasps by Jörg Heinz for many decades because these experts appreciate the perfection and creative diversity of the original.